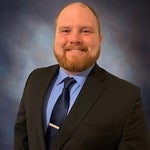 Brad Congdon is an Associate Attorney at The Tisdale Law Firm. He joined our firm in April of 2021 and his practice consists of civil litigation, personal injury, family law, and estates. Prior to joining our firm Brad practiced civil litigation, including insurance defense and oil and gas, in Chickasha, Oklahoma.

He is licensed to practice law in Texas, Oklahoma, and the United States District Court for the Western District of Oklahoma. Brad obtained his Juris Doctor from the University of Oklahoma College of Law in May of 2019. While in law school he interned at multiple firms focused on civil litigation.

Prior to attending law school Brad served as an Infantryman in the United States Army from February of 2010 to August of 2016. He achieved the rank of Staff Sergeant and served in multiple duty stations domestically, including Fort Hood, as well as internationally in Germany and Afghanistan. Brad's familiarity with military life and Fort Hood is an asset to his clients and the firm.

In August of 2009 Brad received his bachelor's degree from Texas A&M University, where he was a member of the Texas A&M Corps of Cadets. Texas A&M football is his favorite past time second only to spending time with his fiancée, Nicole, and daughter, Mary.

Thank you for contacting us. We will get back to you shortly.

Please complete all required fields below.